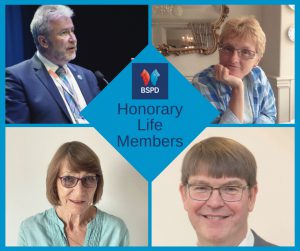 Four exceptional dentists, who have all left an indelible legacy on the specialty of paediatric dentistry, have been awarded Honorary Life Membership of BSPD. Richard Welbury, Barbara Chadwick, Stephen Fayle and Linda Arch have all played important leadership roles, both clinically and personally, serving in different capacities on BSPD’s national executive.

Professor Barbara Chadwick MBE was for most of her career based at Cardiff University School of Dentistry, most recently as Director of Education and Students, where she inspired many young dentists to choose paediatric dentistry as a career pathway.

A national spokesperson for BSPD, Stephen Fayle has been a Consultant in Paediatric Dentistry and Honorary Senior Lecturer at Leeds Dental Institute (LDI) for most of his career. His influence has been felt throughout the UK due to his unstinting 25-year commitment to the wider NHS and national professional societies.

Linda Arch combined roles as a clinician, a researcher, a lecturer and a mentor.  The contribution she made to the Merseyside branch was enormous, serving in most branch roles; at national level she served as a Secretary for BSPD. As a postgraduate tutor for Health Education England she ran courses in paediatric dentistry.

All four life memberships were announced at the 2021 annual conference hosted by the Merseyside branch and are due to be presented at a study day in Liverpool in 2022.

Professor Claire Stevens CBE, BSPD’s Spokesperson said: “All four members have played an exceptional role in BSPD’s story over the last three decades and we are very happy that they will all remain part of the Society to which they have given so much.”